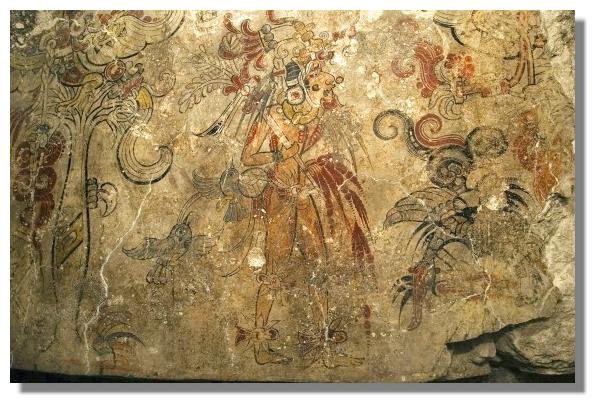 Discovery of Mayan Mural Not Seen For Nearly Two Millennia

WASHINGTON  Archaeologist William Saturno said Tuesday he was awe-struck when he uncovered a Maya mural not seen for nearly two millennia.

Discovered at the San Bartolo site in Guatemala, the mural covers the west wall of a room attached to a pyramid, Saturno said at a briefing.

In brilliant color, the mural tells the Maya story of creation, he said. It was painted about 100 B.C., but later covered when the room was filled in.

"It could have been painted yesterday,'' Saturno said in a briefing organized by the National Geographic Society, which supported his work and will detail the finding in the January issue of its magazine.

Saturno, of the University of New Hampshire, first reported discovery of the site in 2002 when he stopped to rest in the jungle, taking shelter in an old trench that turned out to be part of the ancient room.

Since then the west and north walls have been uncovered. The room's other walls had been demolished and used for fill, he said. The west wall was the centerpiece of the room, Saturno said.

The mural includes four deities, which are variations of the same figure, the son of the corn god.

Another section shows the corn god crowning himself king upon a wooden scaffold, and the final section shows a historic coronation of a Maya king.

Some of the writing can be understood, Saturno said, but much of it is so old it is hard to decipher.

Nearby, archaeologists led by Guatemalan Monica Pellecer Alecio found the oldest known Maya royal burial, from around 150 B.C. Excavating beneath a small pyramid, that team found a burial complex that included ceramic vessels and the bones of a man, with a jade plaque  the symbol of Maya royalty  on his chest.

GUATEMALA CITY  Mayan priests will purify a sacred archaeological site to eliminate "bad spirits" after President Bush visits next week, an official with close ties to the group said Thursday.

"That a person like (Bush), with the persecution of our migrant brothers in the United States, with the wars he has provoked, is going to walk in our sacred lands, is an offense for the Mayan people and their culture," Juan Tiney, the director of a Mayan nongovernmental organization with close ties to Mayan religious and political leaders, said Thursday.

Bush's seven-day tour of Latin America includes a stopover beginning late Sunday in Guatemala. On Monday morning he is scheduled to visit the archaeological site Iximche on the high western plateau in a region of the Central American country populated mostly by Mayans.

Tiney said the "spirit guides of the Mayan community" decided it would be necessary to cleanse the sacred site of "bad spirits" after Bush's visit so that their ancestors could rest in peace. He also said the rites _ which entail chanting and burning incense, herbs and candles _ would prepare the site for the third summit of Latin American Indians March 26-30.

Bush's trip has already has sparked protests elsewhere in Latin America, including protests and clashes with police in Brazil hours before his arrival. In Bogota, Colombia, which Bush will visit on Sunday, 200 masked students battled 300 riot police with rocks and small homemade explosives.

The tour is aimed at challenging a widespread perception that the United States has neglected the region and at combatting the rising influence of Venezuelan leftist President Hugo Chavez, who has called Bush "history's greatest killer" and "the devil."