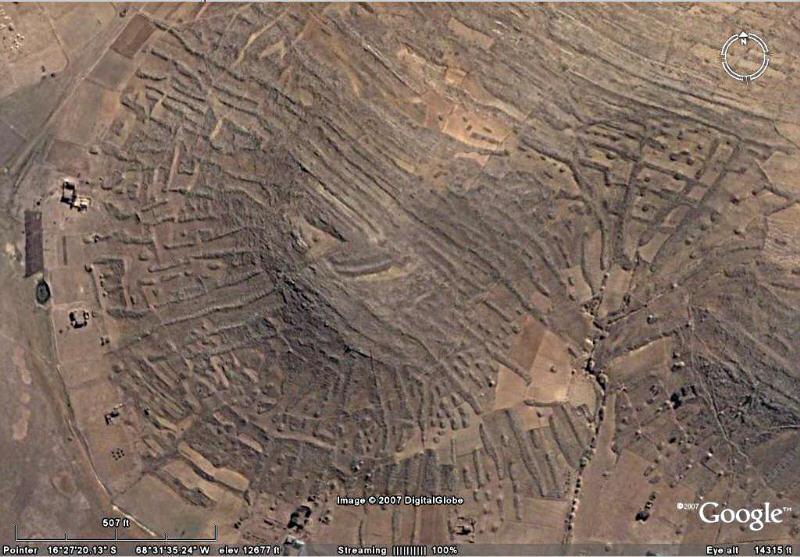 Using earth orbiting satellites, acclaimed researcher David Flynn has studied the high plateau of Bolivia and found previously undiscovered unnatural patterns stretching outward from Lake Titicaca for hundreds of square miles.  The geoglyphic works range from arrow straight parallel lines, enormous over lapping perfect circles and rectangles to 'labyrinth like' systems of walls and mounds extending over every feature of the terrain.

One hundred and twenty miles south of the lake, spirals, linear arrays and crisscrossing paths are scored into the earth covering an entire desert. Closer to the lake, branching walls and rectangular cells can be seen running vertically down hills. Many of these walls extend for hundreds of feet or more and maintain an average width of 15 feet. The estimated combined mass of the geoglyphic formations surrounding Lake Titicaca is staggering, exceeding many of the greatest known constructions of the ancient world.

Many researchers believe that the ruins of Tiahuanaco, situated only 12 miles south of Lake Titicaca and near the center of the geoglyphic landscape, is the oldest city ever discovered on earth. Consistent with these theories, the Inca living in the region during the Spanish conquest explained that Tiahuanaco had existed for thousands of years before their civilization began.

According to Inca legend, Lake Titicaca was revered as the location where the god Viracocha created a race of giants and later, the first humans. The Inca maintained that the giants built Tiahuanaco and also many other cities and structures in the area. However, due to their great evil, Viracocha destroyed the giants in a world flood. This legend is still believed by the local Indian inhabitants to this day.

The geoglyphs covering this area also exhibit extreme age. In areas where ice age sediment surrounding hills and mountains has been eroded by rain and wind, patterns carved into the bedrock underneath the sediment has been exposed, suggesting their creation sometime before the last glacial melt near the end of the Pleistocene era, c. 13,000 years ago.

Early researchers speculated that Inca and pre-Inca farming techniques produced the anomalous patterns on the ground around Lake Titicaca, especially in the horizontal terracing found surrounding the lake itself. However, the altitude of the Bolivian high plain presents several problems with a farming related explanation for the majority of the geoglyphs in the region.

At an average of 12,500 feet above sea level, most of the shapes and patterns are located in areas that have not been conducive for growing crops for the last 10,000 years. Their creation would have required an immense workforce laboring for hundreds of years in such thin air that altitude sickness was a real danger... literally, a super human effort. Additionally, recent high-resolution satellite images suggest that most of the features are characteristic of religious and ritualistic forms of pre-Incan art. They may even represent a sophisticated yet unknown form of communication.

The Nazca lines in Peru are perhaps one of the closest analogues to the geoglyphs at Titicaca. Both the Nazca lines and the Titicaca geoglyphs seem to embody a system of thought unlike any in modern times. Their exact purpose and method of construction remains unclear. However, many of the geoglyphs of Lake Titicaca were created by whole scale excavation of entire mountainsides at altitudes of over 14,000 feet above sea level where as the Nazca lines were etched superficially into the desert at low altitude near the Pacific coast.

Because of the unprecedented effort and resources nessesary for the creation of the patterns around Titicaca, they must have conveyed incredible significance in the minds of their builders. In our time they exist as one of the greatest remnants of any ancient civilization a civilization that up until now, has been overlooked. In this light these newly discovered geoglyphs most certainly warrant further serious scientific study.


* To read the full report Discovery of vast prehistoric works built by Giants? by researcher David Flynn, including satellite images of the vast network described in this article, please visit: http://www.officialdisclosure.com/giants.htm